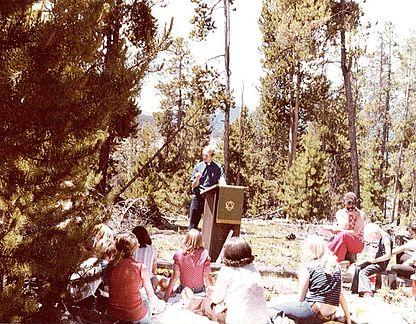 "As a history buff, I love reading about the history of this congregation.  It helps me understand the past so I can be a part of creating a future. Plus we are a young enough congregation that some of the people who were in that first congregation are still active.  What fun to get to know our founders and what they achieved."

Lutherans in Summit County first worshipped together in the old town hall in Frisco, then at St. John’s Episcopal Church in Breckenridge, with supply pastors from the Missouri Synod leading the services. In 1972 the Lutheran Church in America (LCA) sent Richard Bansemer as a full time pastor to formally establish the congregation. With 64 adult members and ten children, the congregation formally organized with the LCA in 1975. Worship services were held in the Dillon Town Hall from 1973 until June 7, 1980 when the congregation celebrated services in the newly constructed church in Dillon Colorado.

Dean Bickel was installed as the second pastor in December 1978. He guided the congregation into its new building in 1980 and served through 1982. Rich Mayfield arrived in March 1983 as the third pastor.

Lord of the Mountains Lutheran Church continued to grow in terms of number of members and financial support during this period of time.  More significantly, however, was the evolution of theology. Pastor Mayfield and the congregation studied and discussed the work of Marcus Borg, John Shelby Spong and other theologians exploring a “progressive” theology. Congregational leaders and Pastor Mayfield  discussed a variety of religious perspectives and adopted a theological viewpoint that resulted in a mission and welcome statement in 1994 that reflected this new understanding of Lutheran identity. This dynamic period of growth and development attracted people from a variety of Christian traditions. Catholics, Baptists, Presbyterians and Methodists were all attracted to this vision of a modern theology. In addition, during this period, the congregation pursued community engagement and social justice projects that would become an important part of the ministries of LOTM.

The growing congregation needed a new sanctuary, classrooms, nursery space and fellowship hall. The expansion of the building was dedicated in June of 1990.

In 2005 Lord of the Mountains formed a 15-member task force to study the issues surrounding homosexual marriage and ordination. Based on the task force report the congregation agreed to publicly welcome lesbian, gay, bisexual, and transgender people as a Reconciling in Christ congregation (https://www.reconcilingworks.org).

On September 13, 2009, Lord of the Mountains celebrated the 35th anniversary of the founding of the congregation.

Pastor Rich Mayfield retired in 2006 after 23 years at Lord of the Mountains. Pastor Kari Reiquam served as co-pastor along with Pastor Rich beginning in November of 1996 until his retirement. She generously shared her many gifts with the congregation until 2008.

Pastor Joseph Holub and his wife Marcia arrived at LOTM in 2008. He served the congregation until his retirement in 2013, leading the congregation in its commitment to progressive Christianity and an outstanding music program.

Pastor Stephanie Kopsch accepted a call and started her ministry on All Saints Sunday, November 3, 2013. She resigned in 2016.

In August 2016, Pastor Liliana Stahlberg was called by the Rocky Mountains Synod to serve as a pastor for redevelopment. After a two-year period of study, the congregation voted to support a Re-Formation team report and recommendations. Subsequently the church council recommended to the congregation that they approve Pastor Stahlberg as the permanent pastor. The congregation overwhelmingly approved, and she was installed in 2018.

Mural on the exterior of the church. The symbols represent the variety of religions that worship in our building.

OUR CHURCH IS OPEN!

Please join us in person and follow our health safety procedures
every Sunday at 9 AM.

CONTACT US by email or phone 970-468-6809 with your emotional, spiritual, physical, and prayer needs