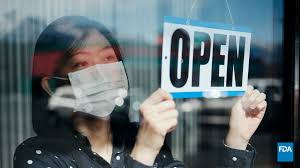 I was visiting a local sandwich shop just after the new isolation protocols allowed patrons inside stores, with masks and social distancing. But this door was closed and locked. The stores next to it had doors open, bidding all to come inside.

I knocked. The owner opened and answered with, “What’s your name”? Perplexed, I gave it. Then I followed with, “I came to place a takeout order.” She said, “Oh, all orders are on-line,” and shut the door. Now I’m not only more perplexed but getting angry. Why was she making it so difficult? I almost walked away.

But my stomach overruled my annoyance. So I took out my phone and went to the app. (Now those of you who know me know how much I love computers and know how easily I negotiate them--or is that negotiate with them?) At any rate, I could choose a sandwich but couldn’t figure out what to click to actually place the order.

As I was standing there, other patrons began knocking on the door. They either were greeted with, “What’s your name?” and received their (on-line) order, or were told to place their order online. As five minutes rolled into ten, and I still could not figure how to place my order, I began to notice how quickly she came to the door, unlocked it, curtly said her piece, then closed and locked it, her hair flying in the wake of her stride.

As I observed her frazzled, almost panicked, behavior, I put my anger and my hunger on the back burner. And then I realized (duhh!!) this wasn’t about me. I focused on trying to get to the bottom of what was bothering her and help if I could.  When she opened the door to the next hopeful patron, I waited until their conversation ended and asked, “Is anything wrong?” She gave me a smile with a thumbs up and said, “No, everything’s ok,” and closed the door. I was glad to see the smile, but I didn’t believe it.

So I put more fervent focus into this instrument of confusion I held in my hand. And behold, I accidentally clicked the right whatchamacallit. My sandwich selection was whisked to some satellite miles above me and thrown back down into the store feet in front of me.

I distracted myself during the wait by gathering a few grocery items at City Market and returned to knock on the door again. She saw me coming and gave another smile, holding my order out to me. I asked, “Why have you gone backwards in protocol, locking your door when you’re allowed to have customers inside?”

Then it poured out, her smile changing to anger and anxiety. “I tried that,” she said. But customers wouldn’t keep their distance, but crowded in at the counter. And I’m by myself. They were getting angry if they didn’t get their sandwich in 10 minutes. I was scared I was going to be shut down because they wouldn’t stay 6’ apart. She continued on, her fear and anxiety increasing about trying to make money within the rules. And her solution of locking the door was driving her to distraction.

When her story was finally all out, her smile returned. She said, “I put 2 cookies and 2 bags of potato chips in with your sandwich to thank you for asking how I was doing. That was so kind. And thank you for listening to me.”

If it had been allowed, I would have held her hand for a second or given a reassuring hug. But instead I simply replied, “You’re welcome."

She shut the door and hurried to make the next sandwich. I walked away, a smile on my face.